The Time to Move T-shirt contest returns in 2019! If you are at least 13 years old and not more than 30, design a Time to Move themed T-shirt that best represents the spirit of the campaign, share it and have a chance to travel around Europe on train!

One of our students, ALEKSANDRA  SUFIN, class 2g has already designed a Time to Move themed T-shirt that best represents the spirit of the campaign TIME TO MOVE- a collection of events for young people organised all over Europe during the month of October. The activities focus on introducing hundreds of possibilities through which you can go abroad and take part in an international projects, explore Europe or gain experience you need for your future, like volunteering in another country for a few months, school exchange or internships abroad.

The winners will receive the following prizes:

Visit the website of the campaign, https://timetomove.eurodesk.eu/ timetomove.info , and read more about the Time to Move.

First classes on their first trip.

On the thirteenth day of September, on Friday, all freshmen together with some teachers went on an integration trip. It took  place outdoors in Folwark in Kamyk. Buses with participants left Częstochowa at 9.00 and after half an hour they were already there. After a short preparation, the presentations of each class began. When everybody got to know each other, a nice woman from Kamyk was preparing something to eat for the participants. When everything was done, teenagers were dancing, because after their little show it was time for a party. But when they heard that they could eat sausages and bread and drink juices, they stopped and at once started rushing to the place where the food was served. They were eating and talking when their teachers told them it was time to come back. Everybody had fun and for sure they won’t forget this amazing day.

photo by Mateusz Gzel from 3 G

Weronika Rodziewicz and Weronika Piotrowska from 3d took part in The World Youth Climate Strike in September and wrote the following article about it. They also prepared the conversation lesson  concerning the topic. As you can see on the photos below  they are really devoted to this serious matter. Teenagers notice the problem and do care about the environment ! 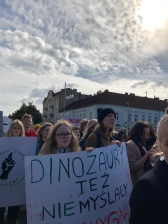 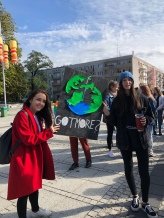 attention of those in governments to a dangerously changing climate. Its

participants oppose the indifferent attitude of the rulers. Protests

against the passivity of politicians related to climate crisis are planned

in 130 countries around the world. The date of September 20 was not chosen

at random. On Monday, September 23, the UN Climate Summit began in New

York. Young people wanted to show that they were not indifferent before

such an important event .

The action also spread across Poland. The organizer of the protests is the

Youth Climate Strike here. It is a movement of pupils and university

September 20, Friday, was the day of the Youth Climate Strike. Częstochowa

also joined the campaign. The demonstation of young people was organized as

a part of the ‘Thousand Cities Protest’. It had its finale at

Biegański Square.Young people gathered with posters, banners and smiles on

High Street to Bieganskiego square shouting their slogans. Students from

our school also took part in the strike. “It was indeed a very

interesting experience. Passers-by waved at us cheerfully and applauded. I

as the voice of young people can really achieve something.”

One of the pedestrians said:”I was most impressed by the creativity of

the students. Their posters were made in comical and comprehensible way.

They draw attention to the most important climate problems, “said

The World Youth Climate team in Częstochowa has already announced in

social media that it would  not be limited to only one event. It is already

aware of environmental problems. We look forward to  participating in them.

We also encourage you to check social networking websites!”