Christmas is a magical time in the year when families are gathering and spending  time together.

In Great Britian Christmas is celebrated on the 25th December, with a Christmas dinner at midday for the whole family.

Here some some British Traditions:

It is quite fresh not drawn tradition. On Christmas day there is the British monarch’s broadcast. It all started in 1932 when King George V read a special speech. The broadcast turned out to be an enormous success.

Nowadays, Queen Elizabeth II continues the tradition to this day. Every year she gives her message to British people, but it became worldwide as the transmission is heard by millions of people all over the world. 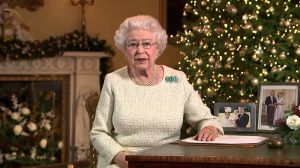 Nowadays, the most popular set of dishes are prawns or smoked salmon at first. Then the main course almost always is turkey, sometimes goose, and for the vegetarians a nut roast served with potatoes, vegetables and  stuffing with gravy and bread sauce.

After consuming the main course of Christmas Dinner, it’s time to eat some dessert, which, in this case, is Christmas Pudding.The pudding is composed of many dried fruits held together by egg and suet, flavoured with cinnamon, nutmeg, cloves, ginger, and other spices. The pudding is usually aged for a month or more, or even a year; the high alcohol content of the pudding prevents it from spoiling during this time.

Christmas Crackers have been a part of the traditional British Christmas since 1847, when almost by accident, Tom Smith invented the cracker. They are used to decorate the table at dinner.

A cracker consists of a segmented cardboard tube wrapped in a brightly decorated twist of paper with a prize in the middle, making it resemble an oversized sweet-wrapper. There’s always a cracker for everyone next to Christmas table.

Although it reminds sweet, in reality it is not. After the cracker is opened we can see our prize. It might be some paper crown or a joke etc. One example of a joke is:

“Where can you find a cow? “In a moooooseum”

Mistletoe was considered sacred by the people of ancient Britain. The Druid priests used it in their sacrifices to the gods. It was believed to have magical properties. People who met under a tree bearing mistletoe were forbidden to fight, even if they were enemies, and anyone who entered a home decorated with mistletoe found the shelter and protection.

The custom of kissing under Mistletoe comes from England. There is a limit to how much you can kiss under one sprig of mistletoe though. For each kiss a berry must be removed and once all the berries are gone – no more kissing!